The Mystery were a late-eighties garage band from Baltimore with a predilection for early rock & roll, R&B and soul music. The mostly female group consisted of five teenagers, among them a high school valedictorian, a leather jacket-wearing rebel and a boy-crazy bassist. The summer after they finished high school, they played a residency at a club in an exclusive West Palm Beach resort, where they learned some hard lessons about life and love.

Introduced in the 1988 Justine Bateman vehicle Satisfaction, the band included singer and guitarist Jennie Lee (Bateman, costar of the hit TV sitcom Family Ties), drummer Mooch (Trini Alvarado), keyboardist Nickie (Scott Coffey), guitarist Billy (Britta Phillips, the voice of Jem from the mid-eighties cartoon band Jem and the Holograms) and bassist Daryle (Julia Roberts, in her first credited role on the big screen). The Mystery also appeared on the movie’s soundtrack album, where they were billed as Justine Bateman and the Mystery. 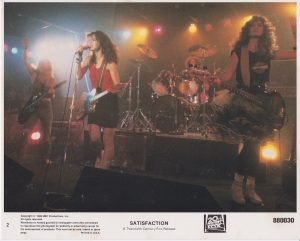