Otis Day & the Knights were an early sixties R&B group who performed in and around Faber, Penn. Popular with both Black and white audiences, the band played everywhere from the Dexter Lake Club roadhouse to the Delta Tau Chi fraternity house at Faber College, where they once provided the entertainment for a particularly rambunctious toga party. Delta brother Donald “Boon” Schoenstein and his girlfriend Katy would later name their firstborn son Otis.

Otis and the band were introduced in the 1978 comedy classic Animal House, a spoof of college fraternity life set in 1962. They are known for the two songs they perform in the movie: the 1959 Isley Brothers hit “Shout” (played at the aforementioned toga party) and the doowop-y “Shama Lama Ding Dong,” written for the movie by composer Mark Davis.

The group crossed over into the real world after Animal House hit big at the box office. Led by DeWayne Jessie, the actor who portrayed the singer in the movie (though he didn’t actually sing the songs on the soundtrack), Otis Day & the Knights played the college and club circuits for decades on an eternal “Toga Party” tour. They released a live concert video in 1987 and a George Clinton-produced studio album in 1989. 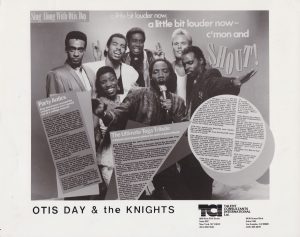