Cherry Bomb were a mid-eighties rock band in Cleveland who hired a talking duck as their manager—though not before singer Beverly Switzler and said duck faced off against a pan-dimensional creature known as the Dark Overlord.

The band was created for the 1986 George Lucas-produced movie adaptation of Howard the Duck, the quasi-absurdist 1970s comic book, presumably to capitalize on the growing trend of pop- and rock-based movie soundtracks. Synthpop star Thomas Dolby wrote and produced four songs for Cherry Bomb and coached the actors in how to move onstage.

On the playback, Cherry Bomb’s music was performed mostly by Dolby—primarily on a state-of-the-art Fairlight CMI synthesizer and sampler—with vocals by the actors who played the musicians in the movie: Lea Thompson (Michael J. Fox’s mother in Back to the Future) co-starring as Beverly, Holly Robinson (later of TV’s 21 Jump Street), Liz Sagal (fresh off the series Double Trouble) and Dominique Davalos.

According to a 1986 interview with Dolby, the producers of Howard the Duck hoped the movie would launch Cherry Bomb as a real-world rock group. Those plans were likely abandoned when the movie imploded at the box office.

Howard The Duck (Music From The Motion Picture Soundtrack) (1986) 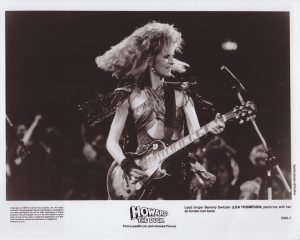